Plants vs. Zombies is developed and originally published by PopCap Games a tower defense action video game for Microsoft Windows and Mac OS X. The game Plants vs. Zombies involves a homeowner using many varieties of plants to repel an army of zombies from “eating their brains”. It was first released on May 5, 2009, available on Steam on the same day. A version for iOS was released in February 2010, and an HD version for the iPad. An extended Xbox Live Arcade version introducing new gameplay modes and features was released on September 8, 2010. PopCap released a Nintendo DS version on January 18, 2011 with content unique to the platform. The PlayStation 3 version was released in February 2011 and with the addition of new co op and in relation to the ways found in the version of Xbox 360. An Plants vs. Zombies Android version of the game exclusively for the Amazon Android App Store, was released on May 31, 2011. On February 16, 2012, a version was released for the BlackBerry PlayBook. Furthermore, both the original Windows and Mac version of the game have been re-released with additional content in a Game of the year edition. The game received a positive response from critics, and was nominated for many awards Interactive Achievement, alongside receiving praise for its soundtrack. A sequel was announced in August 2012 and is now to be released in the spring of 2013. 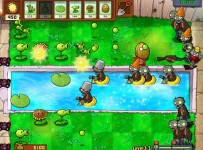